ON A MISSION


The earliest AA meeting in Phuket that we have accurate information for, was started at Karon Beach in December 1989 by Bob S.  He was travelling to Phuket from Bangkok and he asked the AA Ruam Rudee Group in Bangkok if there was a meeting in Phuket.  They gave him the name of a ‘loner’ who managed a hotel in the Cherngtalay / Bang Tao area. When Bob arrived in Phuket, he found the AA loner had been transferred out of Thailand.

Bob started a meeting in Karon Beach called ‘Friends of Bill W Sunset Meeting’.  It met regularly for three months at the Friendship Bar on Karon Beach, opposite the Friendship Bungalows.  He placed ‘Friends of Bill W Meeting’ ads in the lobbies of the hotels in Patong, at the Mermaid (the only hotel in Karon) and at the beach restaurant in Kata.  Karon beach was a very quiet area, with some bungalows and beautiful beaches on the coastal areas. The road from Karon beach to Kata was a dirt track over the hills.  There was no road to Patong at that time.  This first meeting did not attract many visitors, but Bob’s efforts helped him stay sober and would lay the ground work for meetings in Phuket. 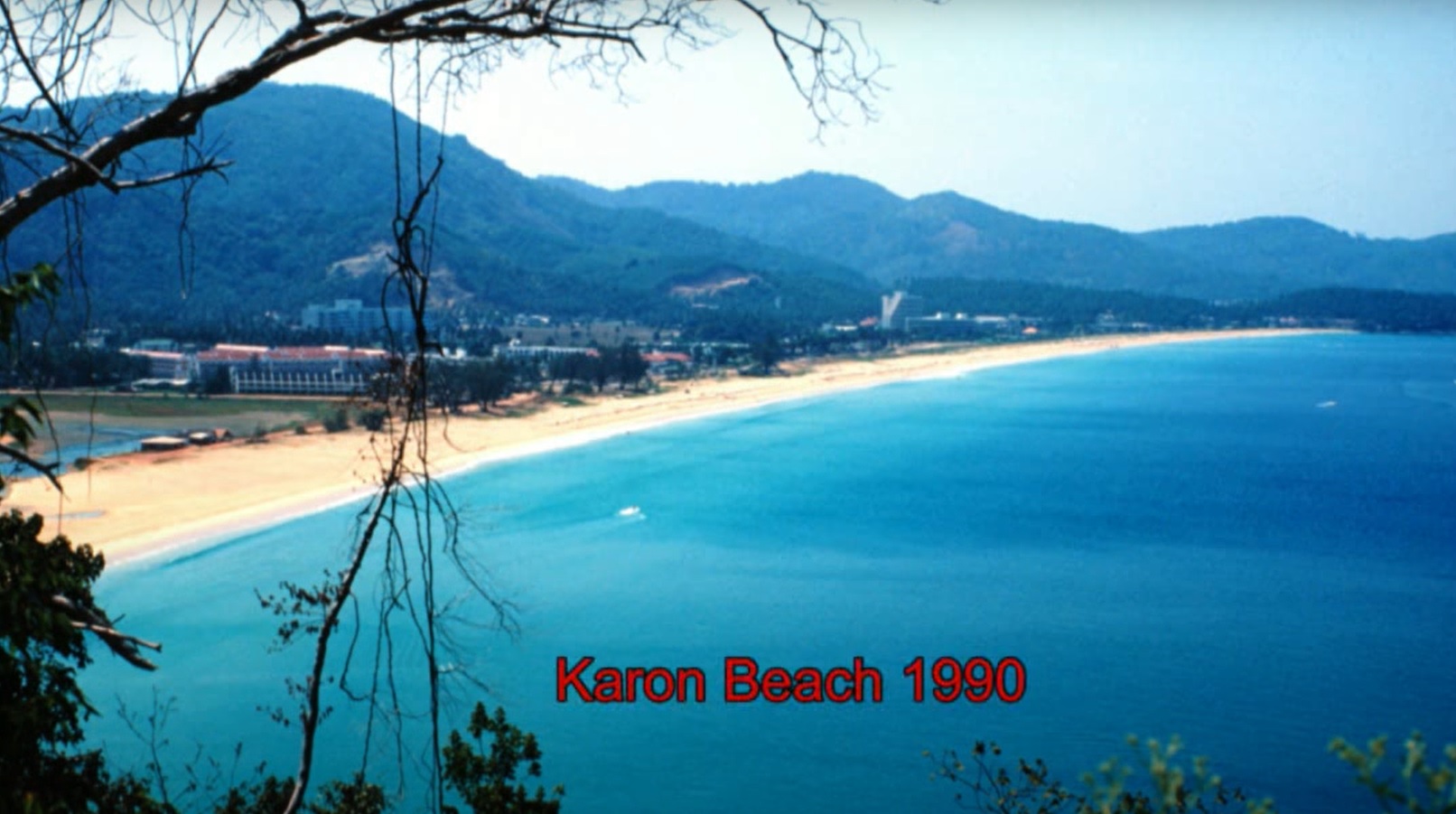 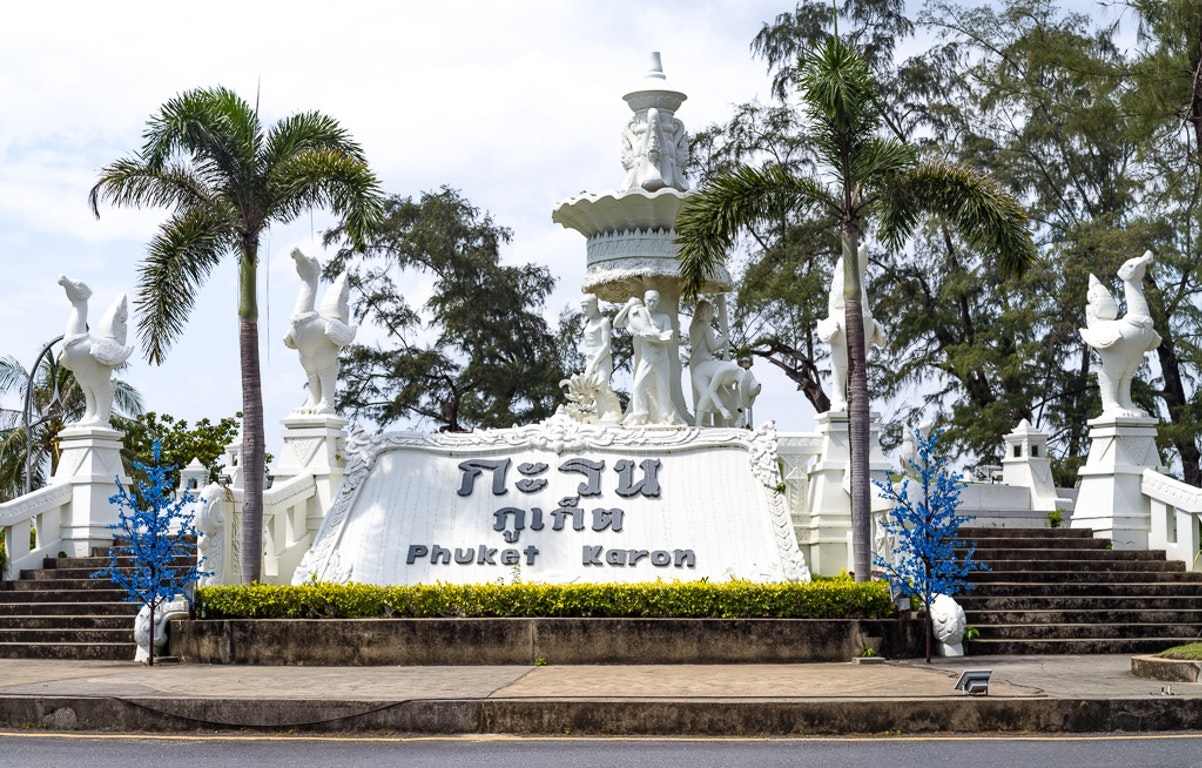 The Phuket Group first met at a bar in Kata.  In January 1993 it moved to the Mission Hospital in Phuket town.  A ‘Big Book’ format was agreed upon with members reading from ‘Alcoholics Anonymous’ and sharing on what they had read or their everyday problems relating to alcoholism.  The meeting was held at 2:00 pm on Sundays in the hospital chapel.  Soon afterwards Phuket Group started a second meeting, a 12 &12 study / discussion held on Wednesday evenings at 7:00 pm.  Both meetings ran for one hour.  In the spring of 2000, the Sunday meeting was rescheduled to start at 7:00pm.  At the hospital’s request, the meetings moved to the 2nd floor conference room, where they meet on Sunday and Wednesday nights from 7:00 pm - 8:00 pm.  Both meetings now meet in Meeting Room 1 (the old chapel), located upstairs towards the back of the hospital.

During the Covid 19 pandemic (2020-) meetings were not possible at the hospital. There was a strict lockdown imposed for the first few months of the pandemic so from April to June 2020 the group met at its regular times using Zoom. This gave an opportunity for some previous members of the group who had moved away from Phuket to join meetings again. As restriction lifted the group returned to face-to-face meetings but continued for a further month or so with a hybrid format allowing members to join on Zoom if they were concerned about meeting in person or health risks associated with entering the hospital environs. The group is still thriving with some of its very early members still attending. 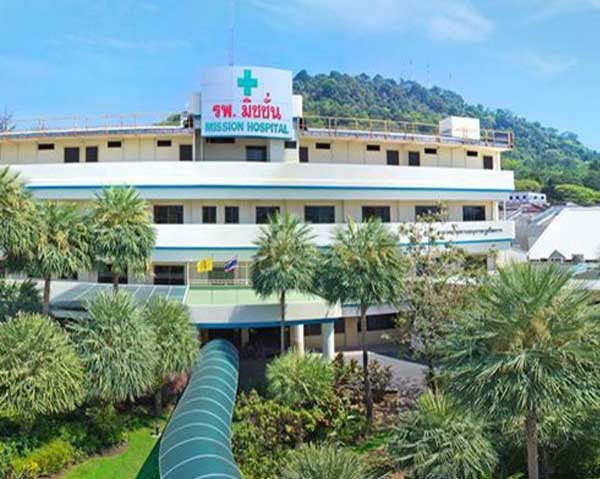 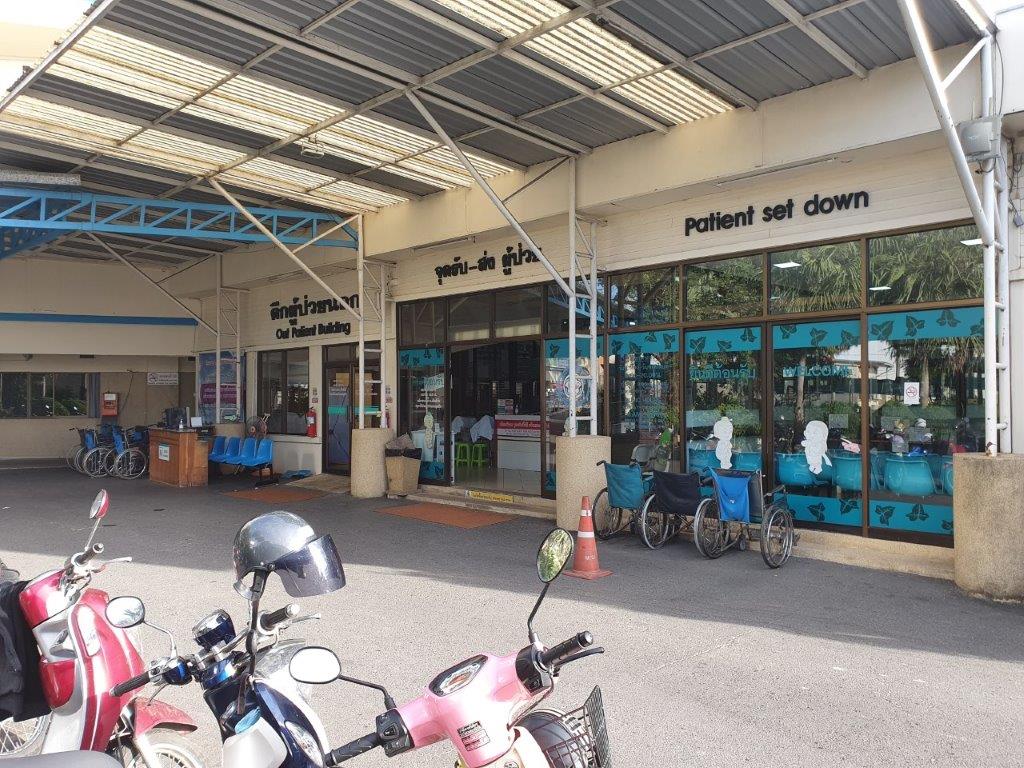 AA Phuket has 6 Groups registered with AA General Service Office in New York, USA including the Phuket Group,  registered in 1993. Here is a short history of the other groups on the island.

Early members met in restaurants and like venues in Patong before the group established itself at the Patong Hospital in 1994-95.  The first meetings were on Fridays at 7:00 pm and the early members shared responsibility for setting up meetings and keeping things going. Frequently returning visitors from overseas became regulars.  The format consisted of a reading from the Big Book followed by a cigarette break, and then sharing.  Meetings had no set ending time and usually lasted more than one hour.

By 2000 the meeting was well established and starting to grow.  It was registered as an AA group with GSO in 2003.

Around this same time 2003, a number of members decided to stop attending the Patong meetings and to find a new meeting venue following acrimonious disagreements about meeting content and language.  The new International Group was formed and starting meeting at the International Hospital in Kathu.

After this the Patong group went dormant with no one attending.  A year or so passed and because the group was not active, it was suggested to take the Patong Group meeting times out of the printed ads.  This stirred one member who said he never liked to see a group close to volunteer to attend the Friday night meetings in Patong.  Not long after this, he moved to Patong and started meetings six days a week in the hospital.  Each meeting’s format was different: Sunday Meditation, Monday Big Book, Tuesday 12&12, Wednesday Daily Reflections, Friday Big Book and Saturday Speaker Meeting.

In 2012 Patong Group was asked to move from Patong Hospital after some policy changes for government buildings.  It took time to find a new home, with meetings being held in various venues in Patong including Starbucks, Patong beach restaurants and an Italian restaurant in Kalim.  The owner of the Kalim restaurant eventually sold it and the premises became a Family Mart.  However, all was not lost as the owner invited AA to move with him to his new restaurant, Pizzeria Hut 101, on Soi Sabai, Patong.  AA met in the fifth-floor meeting room on Mondays, Thursdays and Saturdays.  The meetings started at 7:00 pm and are one-hour duration.  Saturday is a speaker meeting.

The group has moved venue three times since and is currently meeting at the Patong International Christian Fellowship after a short residency at the Austrian Garden. The group still meets three times a week. 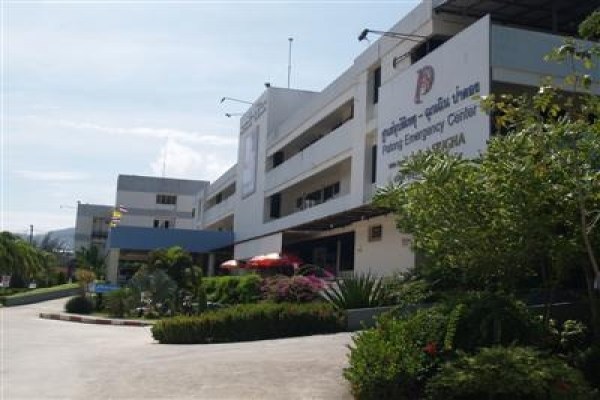 Scandinavian AAs, especially Swedes, have attended AA meetings in Phuket since at least the early 1990’s.  For many though it proved too difficult to follow the English language and many Scandinavian AAs eventually stopped coming to the English language meetings.  In 1999 a solution was found when two Swedish AA’s, started a “Round Table” meeting in Swedish language for Scandinavians.  The meeting met in the Soi Paradise hotel / bar owned by a Swedish ex-pat – a heavy drinking non-AA - and his partner. In 2001 the meeting moved to a restaurant in Karon where it met twice weekly – one AM meeting and one PM meeting. After a couple of years, they rented an apartment for the meeting which lasted until the new treasurer ran off with the money.  The Round Table meetings continued until 2003 when they moved to Wat Karon School. A second meeting was also started in 2019 at a venue in Thalang. The Scandinavian Group stopped meeting during the Covid 19 lockdown in 2020.

Chalong has had regular meetings since 1999.  The earliest meetings were twice weekly on the Chalong Pier.  Some long-term Phuket AA’s eventually found sobriety on the pier, having previously been more accustomed to waking up under it…  In 2002 a new Chalong Monday meeting started, and the meetings became known as the ‘Chalong Clinic’ meeting as it met at the Chalong Health Clinic at the Chalong Circle.  This meeting later moved to Tuesdays at 1:00 pm. In 2006 the group was registered with GSO as the ‘Chalong Group’.  In 2009 the group moved to the Green Man Pub & Restaurant.  AA members get 10% discount on food and non-alcoholic beverage!  The group meets in the ‘Blue Room’ on the second floor.  Thursday and Saturday meetings started in March 2011. There are three 1- hour meetings per week at 1:00 pm – Tuesday ‘Big Book’, Thursday ‘As Bills Sees It’ and Saturday ‘12 x 12’. 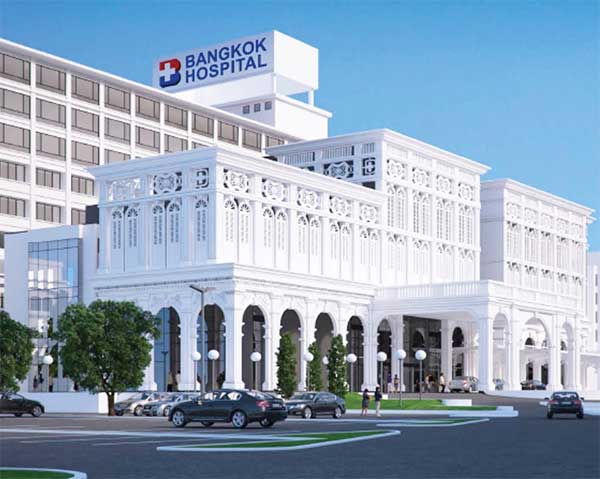 In September 2004, Phuket International Hospital began renovations, and the group needed a new home.  A member persuaded his friend, who was working for the ‘boss’ of the Bangkok Phuket Hospital, to find AA a venue there.  The new meeting at Bangkok Phuket Hospital was held on Friday nights at 7:00 pm.  For the first few years it met in various rooms and waiting areas of the Psychiatric Department on the first floor, after the department was officially closed for the day.  From time to time psychiatric patients would arrive ‘after hours’ and were quite surprised to find an AA meeting when they were hoping to find a doctor or nurse.  After a few years the hospital relocated the meeting to the 3rd Floor conference room where it meets on Friday nights at 7:00 pm.  This room was not built when AA first started meetings in the Bangkok Phuket Hospital. When the hospital became a main location for Covid 19 treatment in March 2020 meetings stopped taking place at the hospital. After a period of meeting online, the group moved to its current home at the Phuket Merlin Hotel

In late 2008, starting a 9.30 am an “As Bill Sees It” meeting was held on Surin Beach.  The Twin Brothers restaurant was chosen for the venue as it had good coffee!  AA newcomers are encouraged to “go to 90 meetings in 90 days” but it was then realized there were no AA meetings in Phuket on Thursdays.  This group was started as a result.  Also, this meeting would be convenient for all those AA’s living in the Bang Tao / Cherngtalay area.  The format of the meeting was a reading from “As Bill Sees It” and from “A Vision for You”.  These were chosen to offer variety from the other established meetings in Phuket.

In early 2010 the group abandoned the Twin Brothers because their coffee machine stopped working and was not repaired.  For 2 years the group met at the Indo Chine restaurant where it formally became the ‘Surin Beach Group’, selected a GSR and began participating at the Phuket District Committee.

Below: Twin Brother Restaurant Surin -The coffee machine can be seen on the right 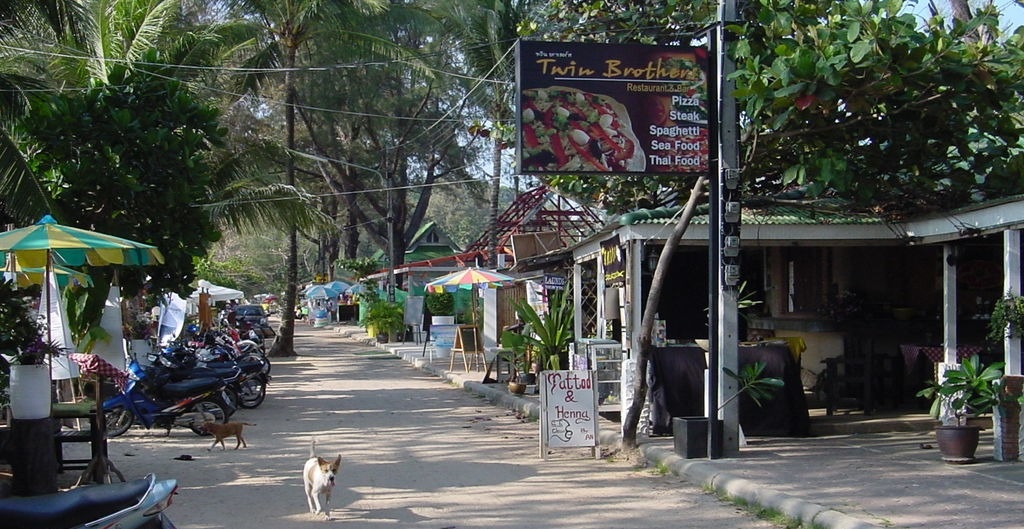 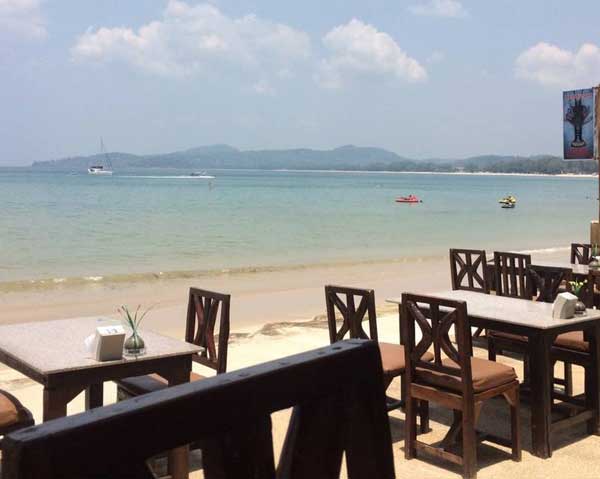 In 2012 the group moved its meetings back to the Twin Brothers restaurant.  They had a new coffee machine and the Indo Chine restaurant had closed for renovations.  A Saturday morning meeting was added.

In early 2013 some members moved away from the group due to an ongoing and unpleasant debate about what was appropriate to share in an AA meeting.  Fortunately, the meeting has survived that controversy.

Visitors often mention that they enjoy hearing the introductory readings at the meetings as they might not have heard them in a long time. Visitors and regulars love the beautiful beach setting.

This group now meets 3 days a week at another beachside restaurant on Bang Tao Beach.  See website for details.